When George Makeen found himself in a sticky situation during an Egypt-Algeria soccer match, it revealed to him the power of Jesus to bring people together. In his latest blog post, the SAT-7 ARABIC Programming Director shares his joy over how SAT-7’s North African programs are doing the same for lonely believers.

Having grown up in Egypt, I knew little about North Africa before I joined SAT-7. True, Egypt west of the Suez canal is technically part of North Africa, but as a nation we see ourselves more as part of the Middle East. I had never visited Libya, Tunisia, Algeria, Morocco, or Mauritania, and I had not met many people from North Africa either.

My main point of reference for these countries was their football teams – and the longstanding, often violent, rivalry between their fans and supporters of the Egyptian national team. 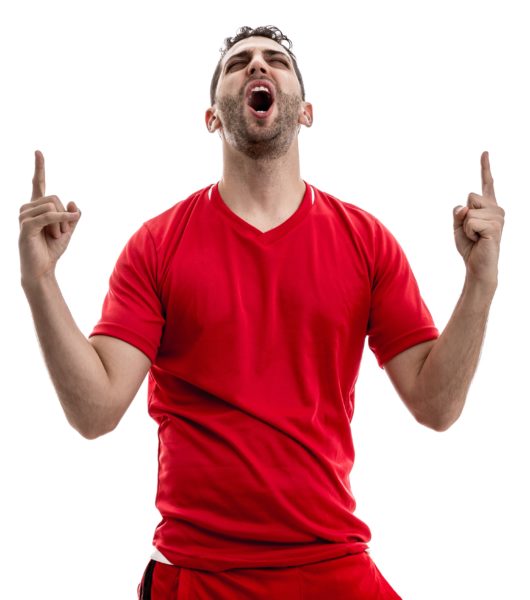 A few years ago, I attended a Christian conference where I met with participants from North Africa. One night, an important match was played between Egypt and Algeria, and I joined a few other Egyptians to watch it in the hotel lounge. We found a good number of North Africans also gathered there to watch.

It was an exciting match, and we all cheered loudly for our respective teams with every good pass. The Egyptian team was lucky, and we won.

Caught up in the excitement, my friends and I forgot we were the minority in the room. Our celebrations were far from tactful – and in a different context, they could have put us in danger.

A BOND ACROSS BORDERS

But that night was different. I will never forget the good laughs we shared with the Algeria fans after the match. We were very different people, but there was a special bond that united us. We were meeting for the first time as brothers and sisters in Christ.

One Tunisian man responded to my digs about the result by joking, “Christ has saved you twice. First, when you accepted him as Lord. Then, again today – because if I wasn’t a Christian, I would have killed you!” He is now a dear friend of mine.

The situation for Christians in Egypt is distinctly different from that of believers in North Africa. In Egypt, as in Syria and Jordan, believers form a relatively large minority and are officially recognized by the state. In these countries, it is normal to find churches and Christian communities. But in North Africa, and in other countries where Christians have come from another religious background, believers face a very different set of challenges.

SAT-7’s programs offer Christians across the Middle East and North Africa the chance to share Jesus with people who would never come to church and who do not know what happens behind the closed doors of a service. But for North African Christians, this “window” into the Christian life is not only a chance to connect with seekers – it is a lifeline for new believers.

FINDING THEY ARE NOT ALONE

When SAT-7 began airing programs made in North Africa, we received several messages from viewers expressing their joy and excitement at finding out they were not the only Christian in their own country.

Everyone needs to feel they belong, and in countries where there are few churches – or indeed none at all – SAT-7 programs are more than a source of spiritual nourishment. They also provide viewers the chance to connect with other believers, to know there are others walking alongside them in faith.

We have since continued to receive positive comments. Writing about the weekly church service broadcast My Church in Algeria, a professor at the Evangelical Theological Seminary in Cairo said, “This is a phenomenon that must be studied. This meeting, and the enthusiasm of these believers is a reminder of the early Church!”

The professor’s comment is so true. Many Algerian believers do not take anything at face value. Every biblical idea must be explained and made relevant to today’s context. When we begin to see our faith, and the biblical issues so familiar to many of us, in this way, we rediscover the power of God’s Word for life today.

North African Christians show remarkable trust in God as well as a joy that is so uplifting to see. These traits are unmissable in Free Souls, a testimony program SAT-7 presents from Algeria. Each story shared is a wonderful witness to seekers in North Africa as well as an encouragement to other Christians there.

SAT-7 has been broadcasting programs to new believers in Algeria for more than 20 years. Now, many viewers are not “new” Christians anymore. They are growing in faith and moving forward in life, forming families and raising a new generation to love God.

This year, we celebrated the production of the first children’s program produced in Algeria by Algerian children. I cannot express the joy and excitement I felt when I watched these wonderful kids in front of the camera, teaching other children Bible verses and stories. The seeds God planted through SAT-7 have brought a great harvest.

My dream is that our journey will not stop here. I hope to see more SAT-7 programs produced in North Africa; to hear more voices rising up to witness to Christ’s love, inspiring and challenging believers not only in their own region but across the Arab World.

Please join me in praying that SAT-7 will encourage North African believers not only to receive God’s love in their own lives, but also to reflect it to their societies. Pray that we can be there to help this growing Church become, once again, an important part of North Africa’s rich culture and history. Pray that believers will contribute to the growth and well-being of their region and work for a brighter future.

Above all, please pray with me that in a divided world, SAT-7’s North African programs will remind us of the love, hope, and joy of being united as one body in Jesus Christ. 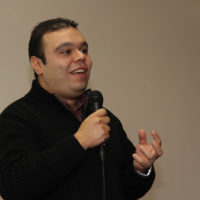 SAT-7 Arabic Channels Director George is from Cairo, Egypt. His education includes a BA in Theology and an MA in Biblical Theology from The Evangelical Theological Seminary in Cairo. His previous work experience expands from script writing and translating to publishing and advertising. George joined SAT-7 in 2003, working as an assistant to the head of programs. As SAT-7 grew to a network of four channels, George played a major role in the development and growth of that expansion. Now, he is responsible for all SAT-7 Arabic language channels.

We stretch your dollar

In 2019, at least 81% of your gift went directly to fund programs building up women, children, and families across the Middle East.
Learn more about accountability

We are accredited by