As SAT-7 turns 25, Founder and President Dr. Terence Ascott looks back on its beginnings. In this excerpt from his upcoming book Dare to Believe!, Dr. Ascott recalls the landmark day of SAT-7’s very first broadcast.

We scheduled a May 31 meeting of our international board, so we could watch the first broadcast together. I am not sure if it was a head cold or stress, but by the day of the meeting, I had completely lost my voice. SAT-7’s Business Director, Erling Wennemyr, had to read my written report, and I had to resort to writing notes in order to respond to questions or when trying to make a point. But by the time I had done so, the board conversation had usually moved to another issue. The board adjourned between 1:30 and 3:30 p.m., so everyone could watch the first broadcast.

We had not really expected any immediate responses to it – thinking it would take time for people to find a two-hour-a-week Arabic broadcast on a European satellite that otherwise broadcast in Albanian and Romanian, but we did get calls and faxes!

Within minutes of the broadcast’s start, a call came into our Nicosia number. It was from a man in the Arabian Peninsula who was astonished at the program presenter he had just seen. “What is this channel? I just saw a woman wearing a cross around her neck and speaking Arabic!” Here was someone who did not even know Arabic-speaking Christians existed!

When we started, we wondered if anyone would be willing to take the risk or go to the expense of making an international phone call to get in touch with us. Up to this point, none of the international radio ministries had offered a phone number to their audiences and instead relied on mail. In the coming days, we were astonished at the number of people who were willing and wanted to make international calls to speak to us. The partners – especially those interested in program production or audience relations – met immediately following the May 31 board meeting. We had workshops on each topic, trying to distribute responsibilities across the group. This was when our Swedish partner, TV-Inter, offered to get more involved in the children’s programming and our Paris-based partner, Life Agape, with the audience follow-up. In the coming months, a lot of new doors opened for us. 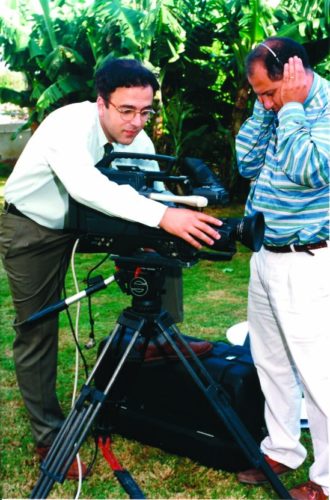 We were amazed to watch how SAT-7 actually being on-air changed people’s attitudes. People who, before, gave us words of encouragement but did little to try to help us, now wanted to be engaged, coming forward with offers of practical help.

I had experienced the same thing twenty years earlier when I was involved in the launch of Huwa wa Hiya, a newsstand magazine for Arab youth. Once the magazine hit the newsstands, people saw that the vision was no longer an optimist’s dream of what could be but a God-given reality, and they wanted to be a part of it. Now, people were flocking to us – clergy who were ready to write or present teaching programs, Christian musicians, would-be producers, counselors who wanted to offer their services to counsel our viewers, camera operators, technicians, and many more. But we were still in the early stages of growth and our infrastructure could not keep up. Typical of this challenge was when we hired a cameraman in Beirut before we even owned our first camera!

Dare to Believe! is available for order now at https://www.terenceascott.com/. It is also available as a Kindle e-book. Terence “Terry” Ascott was born in the UK but has lived in the Middle East since the early 1970s, where he has was involved in the launch of a Christian Arabic newsstand magazine, and then started the Christian television network SAT-7.

His new book, Dare to Believe! is not just his own story but it will give the reader inspiring insights into the courageous work and witness of the diverse Christian communities of the Middle East and North Africa, some of whom date their history back to the time of the apostles.

The book will also help the reader understand the challenges Terry faced in developing the new model of Christian television that typifies SAT-7 – an indigenous network which today broadcasts to millions in Arabic, Turkish and Farsi.